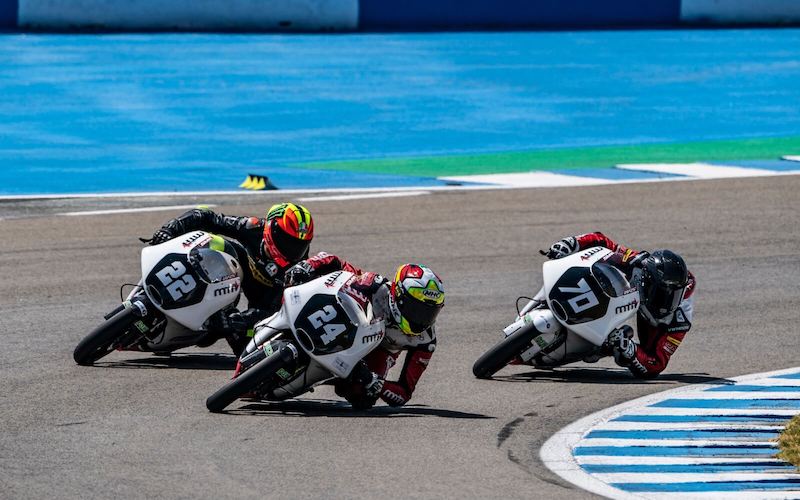 It is with an unpleasant inconvenience that the sixth round of the World Junior Moto3 opens: the Swiss Dettwiler has tested positive for covid, so he will not be able to lose part of the competition, in his place the very young Elia Bartolini, Italian talent fighting for the title of tricolor champion.

However, as troubled as the start of the weekend was, the guys from MTA Italia can immediately find the right set up and impose their rhythm on everyone else. In fact, already during the first qualifying round Iván Ortolá manages to win the pole position, in front of the novice Bartolini who, despite his first experiences in the world junior, immediately makes clear his value and wins the 2nd position. A little further back Josh Whatley with the 13th time trial, but taking into account the crazy temperatures of Jerez and the red-hot asphalt, almost at 90°, the result is excellent!

In this case, the weekend’s quarter if it disputes the domenica when, for the first time in the history of the squadra corse Marchigiana, the first row is occupied by due red, white and black: Iván Ortolá and Elia Bartolini who with concentration to livelli altissimi, danno inizio ad uno spettacolo strepitoso! Ortolá holds the first position, while Bartolini is threaded by Kelso and then Munoz, falling in fourth position.

In the meantime, Whatley, from 13° box, and gains one at the detriment of Salvador, but it is later walked back from the colombian, remaining pinned to the thirteenth place, while, in the group of head, Bartolini is in the fifth box, and the team-mate Ortolá firmly keeps the leadership race to 0.021 detachment from Munoz, who, as a missile, the third step on the finish steals in the first place to Ortolá, but nothing is yet said, in fact, the number 24 is not spring-loaded and try to stay more can be attached to the first, as does the Italian rookie Bartolini who grandiosamente puts himself in second position and then, thanks to a game of trails, put himself in the lead, in front of Munoz, Kelso and his teammate Ortolá, in fourth position at 0.083 seconds of detachment.

There are 9 laps left at the end and in the second part of the group, Whatley fights for the twelfth position with Rueda, while in front of Munoz is first, Ortolá second and following Garcia and Bartolini, who in the second sector surpasses the Spaniard and takes third with a breathtaking overtake.

And it is precisely in the middle of the race that the team play at the MTA begins to pay: Ortolá Bartolini and occupy the top two positions in front of Garcia and Munoz, from which there is 0.617 detachment, but hit the scene: not only Whatley, due to a fall, ends prematurely in his first race of the day, but also Bartolini off too long, first touching the back of Ortolá and then slipping in the twenty-third position. Fortunately, however, Ortolá, determined to seek the first victory, remains fixed in the first position, keeping behind his opponents: Matsuyama, Garcia, Ogden and Munoz.

The checkered flag is getting closer and closer: there are three laps to go, just when Ortolá is paraded by Ogeden, but the Spaniard does not delay and remains there, glued to the English to study his opponent and look for the opportunity to regain first place. The suspance grows proportionally to the extraordinary situation: right in the last sector Ortolá is paraded by Munoz and while everyone is with his breath suspended for what may happen, the spearhead of the MTA team tries to recover his opponents, putting himself in the lead of the race with 4 turns from the end, 4 very long turns. The pace is there, there is also the grit and desire to go and take the first victory of the season, but Ogden takes advantage of the trail, winning the first place, in front of Munoz, forcing Ortolá to close 3°, only 78 thousandths from the first, while Bartolini recovers and to pass under the chess in 18° position.

All three drivers of the Italian team aim to get back in Race 2, but if for Ortolá the start is excellent and manages to stay among the first, it is not at all for Bartolini who is paraded by Kelso and Munoz closing the first corner in fourth position, and then continue to climb the standings on the contrary. Good start also for Whatley who keeps his thirteenth place.

Still improvements to Ortolá that, on the straight leading up to the beginning of the third lap, it leads to 0.4 from the leader Kelso, behind David Munoz, as well as for Bartolini that retrieves Salvador and leads to a second from the leader, starting her comeback to the fifth and then fourth position, in front of the Salvador Garcia, immediately behind Ortolá, in the defense of the third-place through clenched teeth.

However, the race is still long, in fact there are still ten laps to go when Whatley, after battling with Van de Goorbergh and Veijer, lands in nineteenth place, in the leading group, instead, Ortolá stitches the gap from the leader Munoz and takes second place, signing the fast lap of the race. The standard-bearer of the Italian, Bartolini, the opposite occurs precisely when he is about to conclude the ninth round of this round and the colors MTA remain on track only the british Whatley struggling with a comeback until the last lap for the 16th position, and the Spanish Ortolá that, head down, and without losing a thousandth of a merger, able to pound with the rhythm fear, lowering the gap was only a tenth dl leader, then stitched up almost completely on the back straight, when it attaches to the rear tire and exceeds the end of the first sector. It seems now done, but it does not close the curve well, they leave free field to Munoz and Holgado so, it is battle again, although now there are only two more laps and hopes decrease as the curves pass, yet Ortolá does not give up and until the last fights for the victory, coming to be at 0.099 from Holgado. Missing a turn, and the count-emotions that are not able to measure the adrenaline for the show to create these guys: now is Munoz to dictate the pace at the front to Holgado and Ortolá, but the Spanish team MTA is not content to replicate the result of the previous race and at the last curve to give Holgado, winning the 2nd position and allowing ourselves to dream of for the next round!