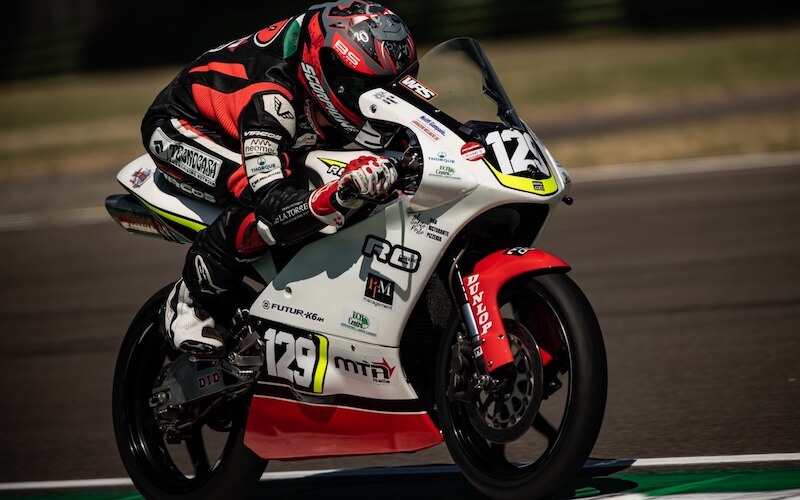 It goes on stage: the Campionato Italiano Velocità returns to the historic and majestic Circuit of Imola for the third round, where between adrenaline, speed and some scare has accumulated a lot of experience, as well as fast laps on fast laps and overtaking at the limit.

Yet, due to the cancellation of the classic Friday free practice sessions, the weekend started with some difficulty, in fact the pilot of modena, in view of the lack of confidence in the front, managed to win only the 21st time in the combined standings and is forced to plan a comeback since the race of Saturday afternoon, in which after a departure in lightning, it retrieves various positions already at the first corner but, due to a difficult opponent to overcome, loses contact with the group of head and finds himself to be alone.

Now it seems that the race is over, but the calm and cold blood of Samuele Santi bring results once again: shatters the stopwatch and scores the fast lap at 2.04.6, despite being in 12th position! The race continues but, following a cut of the variant, he is applied a penalty of 2 seconds, which in any case does not compromise the comeback of the hundred twenty-nine that passes under the chess in 13th position.

The good result obtained and the feeling found with the bike bring further confidence in the warm up on Sunday where, by hooking up with the train of the first ones, he again signs one of the fastest laps, however the enthusiasm born during these breathtaking laps closes the turn with a slip. Head down, we return to the pits to resume concentration and improve the result of the previous race, but while the hours pass fast, a few menacing drops begin to descend on the asphalt, increasing the pre-race tension that will be declared dry at the start.

When the traffic lights go out, however, the number 129, will be a little hesitant, almost to herald the next great scare: on the fifth lap, in fact, Santi comes out wide from the Piratella and with the rear tire touches the still slimy curb, becoming the victim of a scary highside that leads to the red flag. Moments of anguish for all, in which the other drivers return to the pit lane and confirm that the MTA’s own carrier was the reason why the race was suspended. Fortunately, however, the Santi stands up and, although sore, seems to be fine. As a precaution, however, he is taken to the mobile clinic for further investigations, which will not find damage except some excoriation and a small cut to the tongue that in a few days will heal: a real luck after such an accident.

But now it’s time to rest a little’ to recover strength, heal and reset the bike, so as to arrive prepared for the end of the month stage in that of Misano.