MTA ITALIA was born and was commissioned by the Italian Motorcycle Federation (FMI) to manage the Italian Team in the Moto 3 World Championship for the following three world seasons, from 2014 to 2016. Since 2017, out of the World Championship, Mta has participated in various championships, from the CIV, to the FIM CEV Talent Cup to the Junior Moto3 World Championship. The owners of the company are Emanuele Ventura and Stefano Tonucci (father of Alessandro Tonucci, former MotoGP rider).

MTA lined up on the grid at the Moto3 World Championship, Andrea Locatelli and Matteo Ferrari, on Moto3 Mahindra, with the team called SAN CARLO TEAM ITALIA.

MTA lined up on the grid at the Moto3 World Championship, Stefano Manzi and Matteo Ferrari. Since Manzi had not turned 16 at the first race in Qatar, Mta Italia made another promising youngster, Marco Bezzecchi, make his debut in Qatar. The championship was run with Moto3 Mahindra, and a Team called 3570 TEAM ITALIA.

MTA lined up on the grid at the Moto3 World Championship, Stefano Valtulini and Lorenzo Petrarca, with Moto3 Mahindra and a team called 3570 TEAM ITALIA.

From the beginning of this season Alessandro Tonucci becomes Team manager and manager of the structure for the years to come. MTA participates in the CIV Moto3, with 3 riders on Mahindra bikes. At the CIV Mta he obtained 2 pole positions, 1 victory and 4 podiums. In June Mta participates in the Moto3 World Championship at Mugello, with the wild card of Sintoni Edoardo. He also takes part in two wild cards at the Moto3 Junior World Championship in Valencia, in July and November.

Mta participates in the CIV Moto3, with 7 riders, three are co-managed in the TM Racing 3570MTA team, and the other four riders are managed directly by the 3570 MTA team.
At Misano, in July, Mta can line up 8 out of 23 riders on the Moto3 grid. Mta also participates in the CIV Premoto3, obtaining a victory in Misano with the driver Davide Cangelosi. The victory of the CIV is in favor of the TM Racing 3570 MTA co-managed team with Kevin Zannoni.

At the same time, MTA also participates in the Junior Moto3 World Championship with the TM Racing 3570MTA co-managed team, with two riders and with its own Team 3570MTA MTA structure with the Japanese rider (former Red Bull Rookies Cup) Ryusei Yamanaka on KTM, in the last three races on the calendar, consistently placing in the TOP 10. He also participates in some wild cards of the European Talent cup with 3 drivers.

The MTA structure was chosen by LEOPARD RACING, entrusting him with the management of the CIV Moto 3 as TEAM LEOPARD JUNIOR ITALIA with HONDA, fielding two riders and obtaining 2 podiums and 2 pole positions.

It also participates in the CIV Moto3, co-managed under the name MM team, with three riders, the team gets a victory at Mugello with the rider Maximilian
Kofler to replace an injured driver.

In addition, together with MM he also participates in Civ Premoto3, with two pilots, Davide Cangelosi and Cristian Lolli. At the same time MTA participates on a permanent basis in the very important championship in the youth panorama of the EUROPEAN TALENT CUP (FIM CEV REPSOL 2019) with two drivers, with the colors and name of the MTA DINOIL Team.

MTA signs the direct and very important collaboration with the Reale Avintia Team, a collaboration that involves MTA from the Moto 3 of Carlos Tatay to the Motogp of Johan Zarco.

The structure directly managed by MTA develops into the Junior Moto 3 World Championship with two riders on KTM, Spinelli Nicholas and Fusco Raffaele, and two riders on the EUROPEAN TALENT CUP, the Swiss Noah Dettwiler and the Canadian Torin Collins, with the name of REALE AVINTIA MTA JUNIOR TEAM.

At the same time he also participates in the CIV Moto3 with only one rider, and expands the project by supporting the Tiesse Racing team ASD in the “MTA Talent Experience” project; a 360-degree training path aimed at very young people aged 5 to 14 riding minibikes. 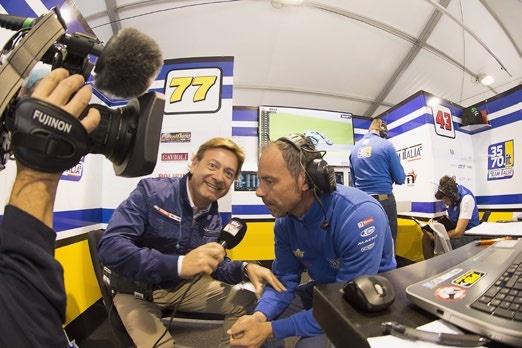 Ventura Emanuele , known as MELA (over twenty years of experience as a mechanic and technical chief in the World Championship, both in the 250 2T, in the 1252T, in the Moto3, and in the Moto2).

In particular, Emanuele, as a mechanic, rejoiced in the victory of his driver Hiroshi Aoyama in the 250cc championship of the year 2009, in the then Team Scott.

Thanks to these appearances, he was able to participate permanently in the 125GP World Championship in 2011 on Aprilia motorcycles (in the Top Ten at the Motegi circuit at the Japanese GP). Since 2012 he has always competed in the Moto3 World Championship with an FTR Honda (winning the third place on the podium at Motegi in the Japanese GP, obtaining the track record in the race, as well as at Phillip Island), while in 2013 on FTR Honda.

Tonucci Stefano , father of Alessandro, Doctor of Economics and registered in the register of accountants, has administrative and managerial / economic experience in the specific sector of motorcycle sport, having managed teams and sports associations since 2007 to date, starting from the levels of minibikes up to management at the World Championship.